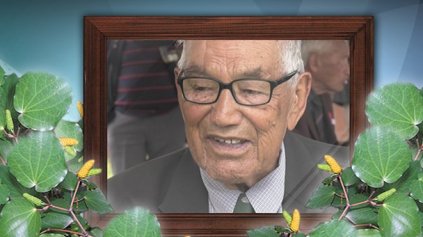 The Māori Party is deeply saddened at the passing of Papa Nolan (Noel) Raihania of Ngāi Tamanuhiri, Rongomaiwahine and Ngāti Porou.  Our heartfelt sympathies are extended to his loving whānau.

“Papa Noel had a precious place in our nation’s heart, as the last President of the 28th Māori Battalion C Company.  He served the war on our behalf – and returned home, profoundly aware of those he left behind in foreign shores, having made the ultimate sacrifice – Theirs is not to reason why, theirs is but to do and die!”

“It was one of the most powerful experiences of his life to return to Italy in 2014 with his daughter, Moana-Lee, and a party of 80 descendants of C Company soldiers and to visit Forli War Cemetery where twelve of the forty-one 28th Māori Battalion Soldiers lay. Everywhere Papa Noel went, the Italians demonstrated their enduring love and respect for the 28th Māori Battalion.

“That was the same at home in Aotearoa – when we had the privilege of meeting up with Papa Noel so many of us felt over-awed by the absolute dignity of his presence.  He epitomised the expression of mana: his courage, his sacrifices and the strength of his service have made our nation richer, and for that we will always remember him with deep love.”

“Today, we are a braver country because of the contribution of those who defended our honour, Te Hokowhitu o Tu,” said Marama Fox, Māori Party Co-leader. “For us of Ikaroa Rawhiti, we feel particularly devastated today at his loss echoing the loss of a distinctive and treasured generation.

“The leadership of Papa Noel was ever-present; on every paepae, in radio and television, at gatherings at Te Papa; at tangi and hui. He spoke up about his respect for the New Zealand Flag; he was an ardent supporter of Māori politics; he was an energetic participant in every debate.

“When we heard he was in the company of HRH Prince Harry, former Governor General Jerry Mateparae, the Italian Ambassador and Pope Francisco, we were not surprised: Papa Noel was a dignitary, a leader, a rangatira, a veteran, our taonga, loved by many.

“And so our ultimate tribute to Papa Noel is to sing once more the beautiful waiata he returned home from Italy with, Buona Notte, goodnight my love, goodnight my heart”