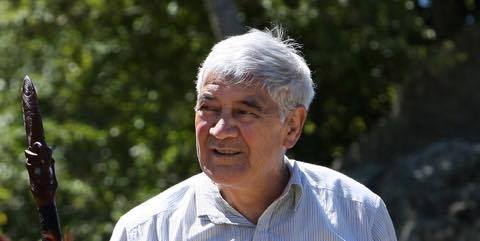 The Māori Party is mourning the loss of Mita Mohi – a “gentle and dedicated warrior” for his people of Ngāti Rangiwewehi, Te Arawa and the wider Māori world.

“I’m absolutely devastated to hear of the passing of this amazing man,” says Te Ururoa Flavell, Māori Party co-leader, MP for Waiariki and a close relative of Mr Mohi.

“Mita was a true rangatira. He had a calming and gentle way about him but deep down inside he really was a warrior for his people.

“He may not have jumped up and down all the time, but when it came to trying to make a difference, especially for troubled Māori youth and even those in prison, he gave himself so generously.

“He believed that through teaching them mau rākau and tikanga Māori that they could turn their lives around and many of them did.

“It’s very hard to find the right words being so far from home right now but I’ll be joining our whānau soon at Awahou Marae to put Mita to rest. I know Ngāti Rangiwewehi and Te Arawa will be in a lot of pain right now.”

Mr Mohi was born in 1938 and in younger days represented the country in rugby league at the 1972 World Cup. He was also a professional wrestler and renowned in Māori tennis circles.

He was a teacher of mau rakau (or the traditional Māori weaponry) having learnt the art from his father. One of his most known pieces of work was setting up the taiaha wānanga at Mokoia Island, which saw tens of thousands of young boys learn about Māori culture – a legacy that is being continued today by his children and mokopuna.

His other work includes being a lecturer at the then Waiariki Polytechnic, serving on the New Zealand Parole Board and as a Justice of the Peace.

Mita will be laid to rest alongside his wife, Hukarere, who passed away in 2008. He is survived by their tamariki, mokopuna, mokopuna tuarua and the countless number of adults, rangatahi, tamariki whose lives he has enriched over his lifetime.