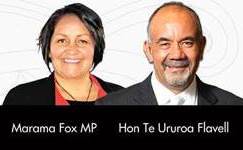 The Māori Party today congratulates all recipients, including tangata whenua, who have dedicated their lives to serving their communities.

“Every recipients’ individual achievements, success and track record of unstinting service to others, recognised in the 2017 New Year Honours List is acknowledged today and we join with their whānau and communities, proud of their many accomplishments,” says Māori Party co-leader Te Ururoa Flavell.

The Māori Party pays tribute to Georgina Kingi, the Principal and visionary of St Joseph’s Māori Girls’ College who has been acknowledged for her services to Māori and education. She has been awarded a DNZM, and becomes Dame Companion of the New Zealand Order of Merit.

“Miss Kingi is a remarkable leader who has worked to ensure the provision of quality education and teaching of te reo me Māori me ōna tikanga in the school she has taught at since 1969 and been thePrincipal of, since 1987,” says Māori Party co-leader Marama Fox.

“Miss Kingi’s skills as a licensed Māori interpreter, a foundation member and former chairperson of the Hawke’s Bay Māori Language Association and a representative on the Māori syllabus committee leaves us with no doubt as to why the school has produced so many talented kōtiro. There is no one more deserving of this accolade,” Ms Fox says.

Tihi Anne Daisy Nobel becomes an Officer of the New Zealand Order of Merit for services to Māori.

“Tihi is the hapū chair for Kanihi-Umutahi and was the lead negotiator for the Ngāruahine Settlement.  The Ngāruahine settlement legislation passed through Parliament recently. She spearheaded her iwi’s fisheries settlement in 2004, which saw the return of $2 million in fishery assets.”

Rerekohu Ahiahi Robertson has also been made an officer of the New Zealand Order of Merit for her services to Māori.

“Mrs Robertson worked initially with her grandfather and then took over as lead claimant to seek redress for the wrongful inclusion of Lake Whatuma in the sale of the Waipukurau block in 1851. The resolution in 2014 and 2015 saw the return of 100 hectares bordering the lake and the restoration of the lake’s original name,” Ms Fox says.

Māori Party co-leader and MP for Waiariki Te Ururoa Flavell is elated Reuben Collier has been awarded an MZNM for services to the television industry and Māori.

“He founded Māui TV Productions in Rotorua in 2001 and has since developed Māui TV from local news coverage to an award-winning national production house. He has recorded New Zealand stories and documented the histories of many marae around New Zealand.”

Te Hauora o Ngāti Hauā Trust chief executive Darrin Haimona has been made a Member of the New Zealand Order of Merit for services to Māori and the arts.

“Mr Haimona leads the Māori Reference Group that developed E Tū Whānau, a Māori-led response to combat family violence while focusing on traditional values. He co-ordinated, compiled and wrote ‘Kia Rangatira Te Mahi’, which has been utilised by the anti-violence  organisation Te Kupenga as a best practice manual for the delivery of Māori men’s stopping violence programmes,” says Ms Fox.

Caroline Marjorie Herewini’s 18 years of being involved with the Women’s Refuge New Zealand has been recognised by being made a Member of the New Zealand Order of Merit for services to women.

Tangiwai Ria’s more than three decades involvement with kapa haka group Waihīrere, has seen the stalwart being made a Member of the New Zealand Order of Merit for services to Māori performing arts and the community.

“Tangiwai is recognised nationally for her involvement with kapa haka and is a life member of Te Matatini. She led Waihīrere to three national victories in 1988, 1998 and 2002. She has provided oversight in the development and implementation of policies for the revitalisation of language and protocols through facilitating wānanga,” says Mr Flavell.

Ms Fox is pleased John Takarangi is now a Member of the New Zealand Order of Merit for services to Māori.

“Mr Takarangi is a specialist in Treaty of Waitangi claims with more than 22 years’ experience with land and fisheries claims. He was appointed as a deputy principal negotiator for Rangitane o Manawatū in 1997 and has been involved with the treaty claim since it was lodged in 1990.”

Heather Rima Te Wiata has also been made a Member of the New Zealand Order of Merit for her services to film and television.

“Ms Wiata is a well-known New Zealand actor with a career spanning 35 years. She has starred in international television productions since 1982 and in more than 60 theatrical productions in New Zealand and Australia,” Ms Fox says.

Alice Katene Doorbar has been involved in the health sector since the 1970s specialising in the care of seniors, particularly elderly Māori. These efforts have seen her awarded a Queen’s Service Medal for here services to health and Māori, Mr Flavell says.

“Early in her career Mrs Doorbar worked at the Waitara Maternity Annex where she helped develop maternity department policies and procedures that were responsive to the needs of Māori. She then joined Te Ara Ora, the health promotion team at Taranaki Base Hospital and was a key driver of healthy lifestyle messages, particularly to Māori communities.”

Maata McManus has been awarded a Queen’s Service Medal for her services to Māori and health says Mr Flavell.

“Ms McManus is a practitioner of the traditional art of korowai weaving and has been producing traditional cloaks for 20 years. She has run a programme to pass on traditional weaving skills and has been involved with Children and Family services to support families who have lost children to Sudden Infant Death Syndrome.”

For his services to Māori and the community Rongokino (George) Ngatai has been awarded a Queen’s Service Medal says Ms Fox.

He has been involved with supporting and delivering a Restorative Justice Programme through Ōrākei Marae, which began operating out of Auckland, Waitākere and North Shore Courts in 2013.”

Arthur Pacey services to rugby and the community has been recognised with a Queen’s Service Medal says Ms Fox.

“Mr Pacey has had a long standing involvement with rugby as a player, coach and administrator. He was involved with the Moutere Rugby Club from the 1950s to the 1980s. He has also been a member of Picton Rowing Club and Waitohi Rugby Club.”

“We salute all this year’s recipients who have worked tirelessly to help our people. Thank you for your commitment, dedication, sacrifice and strength to do your best for our nation”, says Ms Fox.