The Māori Party joins the country in paying tribute to Helen Kelly who they describe as a "wahine toa." 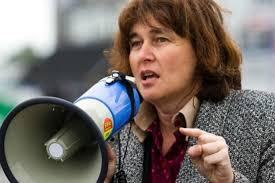 "Aotearoa lost a champion for workers today – a woman born to fight for some of our society's most vulnerable people," said Māori Party co-leader Marama Fox.

"Her unwavering commitment, energy and intelligence made her a wahine toa and while I didn't know her personally, her work is praised and remembered in many parts of the country where Māori live," said Ms Fox.

Māori Party co-leader Te Ururoa Flavell described Helen as "an engaging lady who had the best interests of her workers at heart."

"Our empathy is with her whānau and the union community. Māori people throughout the country held her in high regard for her strong advocacy," said Mr Flavell.

"I have much respect for Helen because her work touched so many Māori workers in forestry, milling and meat works throughout the country but also in my electorate.

"She was always there for them at the picket line with them and working for them behind the scenes."