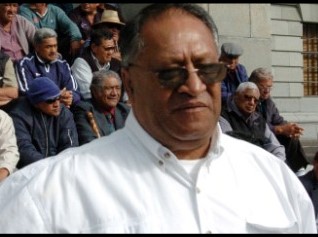 “Joe was relentless in his pursuit for justice for ex-sawmill workers who were exposed to pentachlorophenol (PCP), a deadly chemical used in New Zealand timber processing for years,” said Te Ururoa Flavell, MP for Waiariki and co-leader of the Māori Party.

In 1988 Mr Harawira, with other former sawmill workers formed Sawmill Workers Against Poisons to explore the impact of the contamination leading to adverse health. Their survey was used to bring together the Ministry of Health, Ministry of Environment and Te Puni Kokiri; leading eventually to the establishment of special health services and a clinic. SWAP then campaigned with Greenpeace to have all remaining contaminated sites cleaned up, including, 25 dumps in the Whakatane area.

“What I admire most about Joe’s campaign was his steadfast determination to take on the corporate warriors, to conduct extensive research into the debilitating effects of PCP and to stand by and for the families affected by chemical poisoning,” said Mr Flavell.

“His ground-breaking campaign resulted in significant transformative outcomes for the people and land of Ngāti Awa.  The research was pivotal in creating a remedial project to clean the whenua and waterways.

“Joe lived the life of a ringa raupa (hard worker). He was dedicated to mātauranga Māori and the protection of the whenua. He was also committed to a path of healing and spiritual commitment.

“He was a devoted trustee for the Riritahi Hona Trust for over 20 years. He earned the respect of tohunga and technical advisors alike. He took on MPs, Cabinet Ministers, the research fraternity, scientists and officials.  Through all of these avenues and relationships, Joe taught us all about sacrifice, courage, perseverance, endurance, and faith.

“Our love and sympathies are extended to his beloved wife Pare and their tamariki, mokopuna, whānau katoa.”

Mr Harawira worked for 29 years in the timber industry before his health declined in 1982, amongst many of his colleagues who were suffering similar symptoms: fatigue, depression, respiratory problems, heart and liver disease and high levels of cancer.

At this time, contaminated sawdust, bark, scrap timber and chemicals were dumped in and around Whakatāne including different marae in Ngāti Awa, especially Taiwhakaea.

His efforts were recorded in a documentary called The Green Chain, and research published in the MAI review (‘Joe Harawira: the emergence of a mātauranga Māori environmentalist’, 2009). That review concluded with a sage comment by Joe: ‘To be unsuccessful is not failure, failure is not fatal but it is having the courage to continue.’

Joe will be lying in the whare tipuna o Toroa at Pūpūāruhe Marae in Whakatāne from Tuesday 10 January.