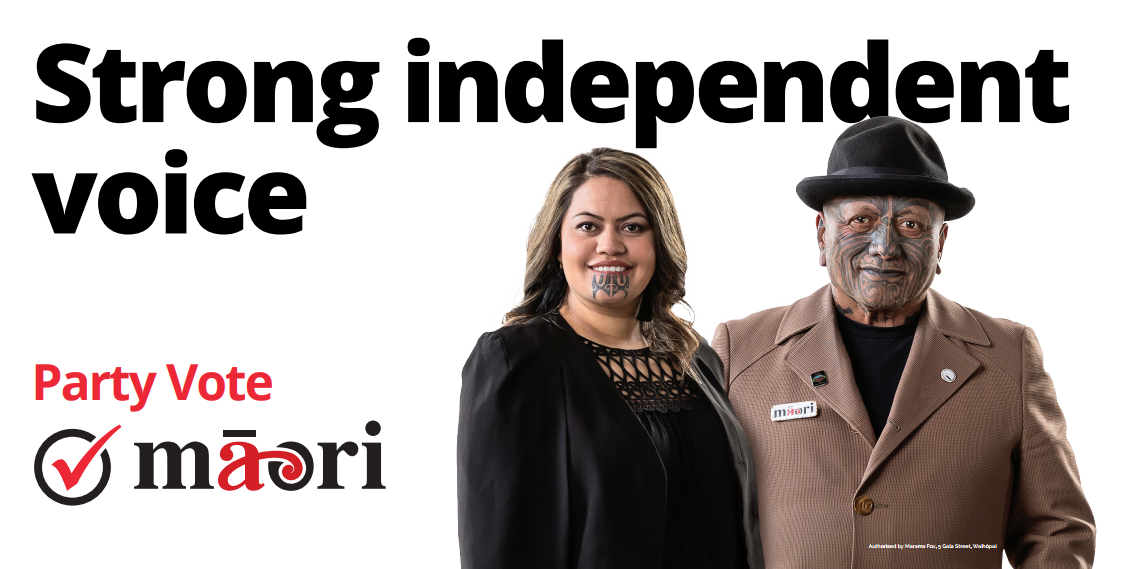 The Māori Party billboards start going live today and tomorrow throughout the country in an effort to capture party votes when Aotearoa goes to the poll in 23 days.

“We’re using uplifting images of Māori and Pacific champions in the majority of our billboards to get some of our key campaign kaupapa and policies across to the nation,” said Māori Party president Tukoroirangi Morgan.

Some of the messages in the 29 billboards reflect the party’s commitment to ending homelessness, tackling high imprisonment rates, opposing foreign ownership of land, investing in kaupapa Māori solutions and continuing to be a strong independent voice for Māori, said Mr Morgan.

Dr O’Sullivan, who features in the health and no foreign ownership of land billboards, said: “The Māori Party is a small party but it has the ability to have great impact.”

Mr Iti, who features in the rehabilitation not prisons and strong independent voice billboards, said “I’ve remain to be loyal to the Māori Party because we need an independent Māori voice in the House. Our voice needs to be heard. It’s about maintaining the mana of our people – tangata whenua there in te whare Paremata.”

Three of the 29 billboards are reminders of the Labour Party’s shocking track record on Māori rights.

“Yes these three billboards are hard-hitting and we are hoping they will get people talking, thinking and realising that Māori rights are not safe in any government, unless our party is at the table with them,” said Mr Morgan.

Dame Turia, who features in several billboards, said: “I felt really sad when I heard Helen Clark say about a month ago that if she could confiscate the foreshore and seabed again from Maori, she would take the same action again.

“So let’s not forget there are still people of influence in the Labour Party who thought nothing of doing this to our people, despite 45,000 people marching against it.

“A vote for the Maori Party is a vote of faith in Māori to do it for themselves,” said Mrs Turia.